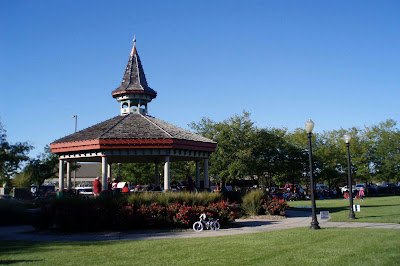 First developed in the 1990s by a land-management subsidiary of Pioneer Hi-Bred, the neighborhood was designed to offer cul-de-sac privacy, green space interconnections, and easy access to the Des Moines metro area.

In spring, crabapple and dogwood blooms explode in pink and white along our tree-lined boulevards. In summer, visitors connect to our 12-acres of signature prairie land via a municipal trail system. Car parking at the prairie is available at Windsor Park, located near the intersection of Windsor Parkway and King's Row. The small "pocket park" features playground equipment appropriate for smaller children, and includes slides, swings, a sandbox, and more. There are also picnic tables and an adjustable basketball hoop.

The neighborhood features an estimated 80 acres of common area and opens spaces, located amongst more than 500 member homes and businesses. Banks, churches, schools, supermarkets, medical, and other services are within easy walk, bike, or car access to the neighborhood.

In warmer months, visit with your neighbors at our annual picnic or summer concert series, held near the association's Dover Park gazebo. The park and gazebo are also available for rental, and the structure is illuminated at night between the Thanksgiving and New Years holidays.

Notable businesses and organizations located in Johnston include DuPont Pioneer (formerly Pioneer Hi-Bred), Iowa Public Television, John Deere Financial, and the national headquarters of The Gardeners of America/Men's Garden Clubs of America. The Iowa National Guard is also headquartered in Johnston; the Camp Dodge military installation serves as a regional and national training center for both active-duty and reserve units.

Located in Polk County, Johnston, Iowa is a growing, on-the-go community that hasn't lost sight of its roots. In 2010, the population of Johnston was approximately 17,000. In the previous 2000 census, the population was approximately 8,600. The community recently passed a $41 million bond referendum that will fund the construction of a new three-year high school by 2016, as well as other school improvements.

Information about Johnston municipal government can be found here.

Information about the Johnston Community School District can be found here.