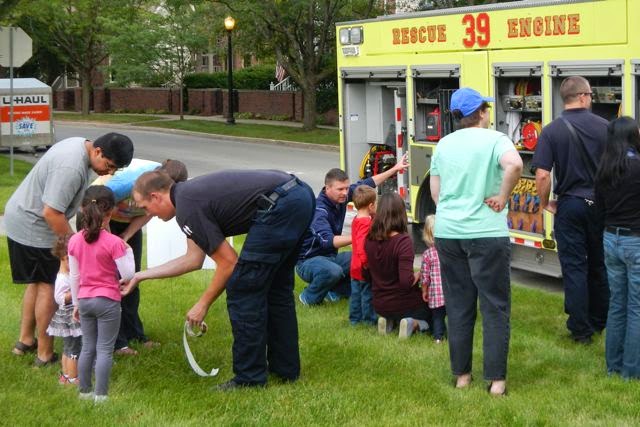 "It's great to see the neighborhood come together every year for this event," says Randy Brown, a 2014 member of the association's board of directors. "We get to spotlight our publicly available private park, complete with gazebo, as one of the benefits of living in Green Meadows West. It also shows how our neighborhood is increasingly connected to area businesses, many of which are within walking and biking distances." 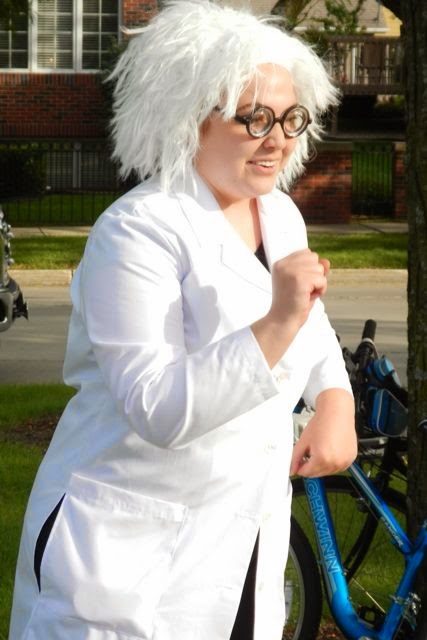 The Johnston Fire Department stopped by to give tours of a truck and ambulance, and to hand out stickers. Nearby, Professor Fizz from the Johnston Public Library did experiments and other science-related activities, including the highly entertaining "Smarty Pants Dance."

Catering was by Texas Roadhouse, and live music was provided by The Black Bird Circus.

For a Facebook photo album of this year's event, click here.
Posted by GMWHOA Editor at 1:00 PM No comments:

Picnic with Your Neighbors Sun., Sept. 14 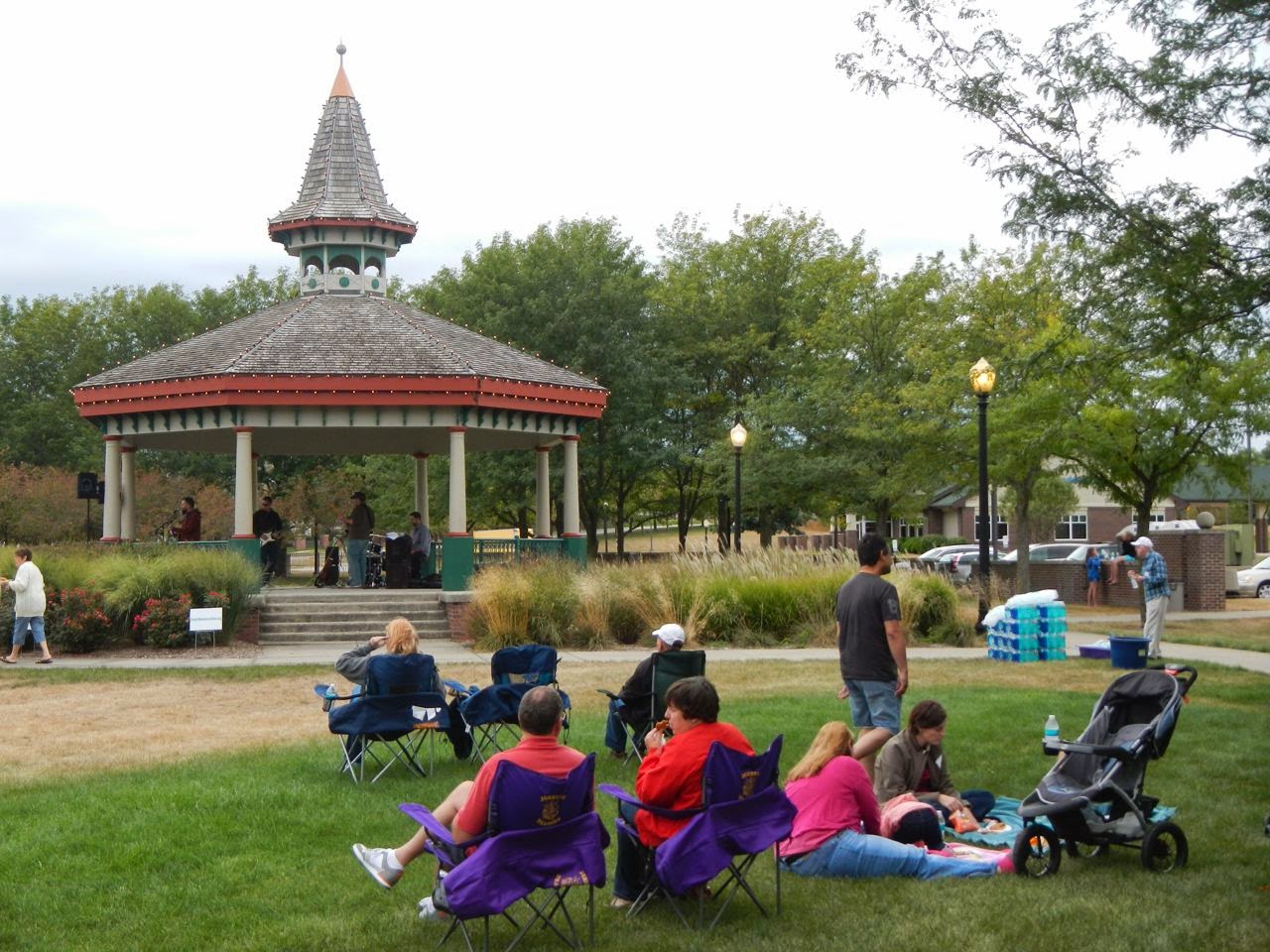 Live music, door prizes, inflatable play equipment, and barbecue dinner for association members will be highlights of the 8th Annual Green Meadows West “Picnic in the Park” event, Sun., Sept. 14, from 4 to 7 p.m. The event will take place near the neighborhood’s signature gazebo, located on the association’s privately maintained "Dover Park."

Music will be provided The Black Bird Circus, a pick-up combo featuring local folk, rock, and other artists, headed up by musician Steve Kowbel.

Inflatable play equipment for younger children will include a bounce house, obstacle course, and giant slide.

A catered barbecue pork or chicken dinner, catered by Texas Roadhouse, will be served free to association members and families. Dinner will include chips, cookie, and bottled water. Table service and hand-sanitizer will also be provided.

When signing into the event, be sure to register for door prizes graciously donated by these event sponsors:
City of Johnston elected leaders and professional staff–including fire, police, library, and public works departments–will also be invited to meet with Green Meadows West neighbors during the event.

See you there!
Posted by GMWHOA Editor at 5:00 AM No comments:

Save the Date: Sept. 14 Will Be Our Annual 'Picnic in the Park'! 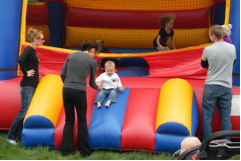 The 8th Annual Green Meadows West “Picnic in the Park” event will be held Sun., Sept. 14, from 4 to 7 p.m., near the neighborhood’s signature gazebo located on the association’s privately maintained “Dover Park.” Other days, the park is available for rental through the association manager.

There will be live music, and the event will again feature inflatable play equipment for younger children, including a bounce house, obstacle course, and giant slide. A free catered barbecue dinner will be served to association members and families.

City leaders and staff–including fire, police, library, and public works personnel–will also be invited to meet with Green Meadows West neighbors during the event.
Posted by GMWHOA Editor at 5:00 AM No comments: 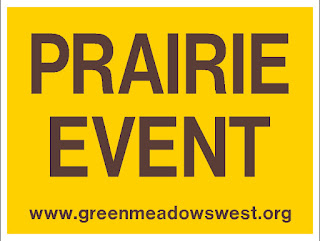 The Green Meadows West Homeowners Association has announced a third series of educational walking tours for the 2014 summer season. Led by expert Inger Lamb of Prairie Landscapes of Iowa LLC, neighbors of all ages are invited to learn about the plants of the neighborhood's more than 12 acres of prairie.

The 2014 dates are:
Walks begin at 7 p.m. at the Windsor Park trailhead, located near the intersection of Windsor Parkway and King's Row. The path through the neighborhood's central prairie is paved.

While the tours usually last about an hour, participants are welcome to come and go as their schedules require. Children are welcome, too. The beginning of the summer season is an ideal time to observe progress on association efforts to maintain and improve storm water drainage through the prairie, as well as to hear about efforts to develop a new prairie area adjacent to a new bike trail connection to N.W. 62nd Avenue.

Prairie events are part of a comprehensive prairie restoration program administered by the association's board of directors. Attendees will learn to identify various types of native and non-native plants, and discussions will often focus on how neighbors can help maintain and improve the quality of the area's showcase landscape.

The prairie area is a unique feature of the Green Meadows West neighborhood, which was originally designed and developed by a subsidiary of the Pioneer Hy-Bred company, now known as DuPont Pioneer.

In addition to running a native landscape restoration and maintenance business, Lamb is a past contributor to publications such as Woodlands & Prairies magazine.

A list of articles of potential interest to prairie enthusiasts is available at her business website here. Resource lists, including planting recommendations for rain garden and native landscapes, are available here.
Posted by GMWHOA Editor at 5:00 AM No comments:

It's spring, and finally time to get back outdoors! As you're cleaning up your yards, landscaping and gardening, or just enjoying walking or biking around, here are a few reminders to help keep our Green Meadows West neighborhood looking good and playing safe. Covenants for each plat are downloadable here. If you have questions about covenant interpretation or enforcement, please do not hesitate to contact the association manager.

Posted by GMWHOA Editor at 10:00 AM No comments: 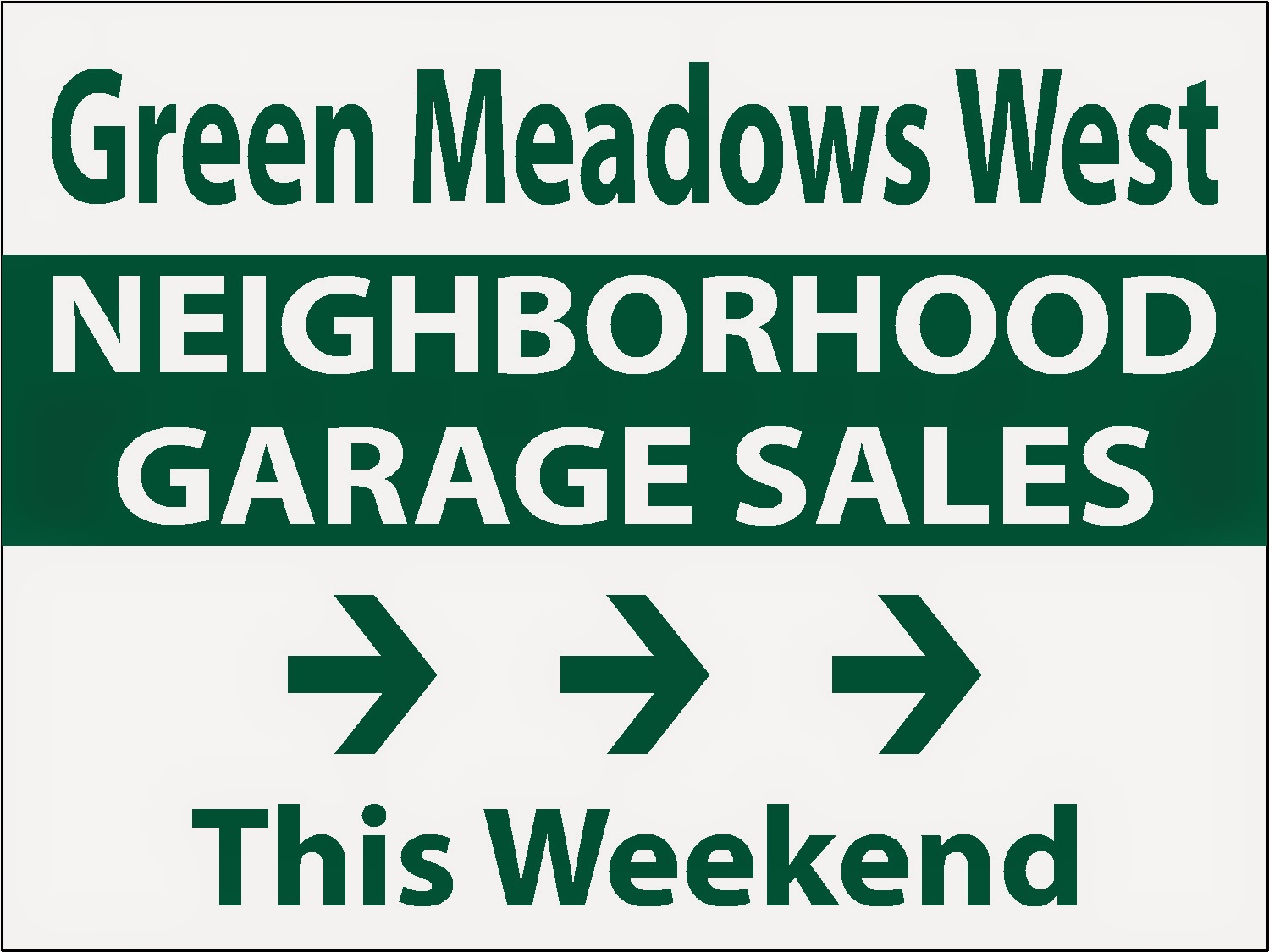 Ready to jump into some spring cleaning? The Green Meadows West Homeowners Association will conduct its annual "neighborhood garage sale" Fri., May 2 and Sat. May 3, 2014.

On and around these dates, neighbors are encouraged to conduct and advertise their individual sales. The association will advertise the neighborhood-wide event via online classifieds, social media, and yard signs posted at entrances.

Starting Mon., April 28, individual signage in association common areas will be allowed temporarily, including at neighborhood entrances. Subject to city enforcement, neighbors are reminded to place signs approximately 18 feet away from the curb on the following streets:
Signs should be removed by those who placed the signs not later than Mon., May 5.

This is the first year that the neighborhood garage sale will not be conducted immediately prior to the City of Johnston's annual "Cleanup Days" event. At this year's annual meeting, members asked that the neighborhood garage sale be moved to a potentially warmer month. On Mon., April 14 and Tues., April 15 Johnston residents can place additional trash and bulky waste items for collection during normal trash collection.

Getting rid of out-dated tax records or other personal, private information? A FREE on-site paper-shredding service will be located at the Johnston Public Library, 6700 Merle Hay Road, on Sat., April 19, from 1 p.m. to 3 p.m.
Posted by GMWHOA Editor at 2:00 PM No comments:

Achieving a quorum of 10 percent of its membership was somewhat problematic, given the sub-zero temperatures, but proxies and late arrivals eventually crossed the required threshold. Special thanks to former association president Steve Halterman for helping "get out the vote."

The minutes of annual meetings are typically published and approved at the subsequent year's meeting. In an effort to communicate annual meeting actions in a more timely manner, however, draft minutes are available to members upon request to the association manager.

Highlights of the 2014 meeting included the election of new directors to the board of directors, presentation of the new year's budget, and discussions of neighbors' concerns regarding light infiltration from newly developed businesses along N.W. 86th Street. Regarding the latter topic, follow-up meetings with the association's Grounds and Property committee are planned for later this spring.

With the election of officers at its regularly scheduled February meeting, the 2014-2015 Board of Directors is now:

Posted by GMWHOA Editor at 11:00 AM No comments:

CORRECTION: Originally, this post indicated that the meeting was scheduled for Mon., Jan. 20. The correct date is Wed., Jan. 22.

The Johnston Community School District continues to seek public comments on a proposal to redraw elementary school boundaries starting in the 2014-2015 academic year. A new proposal has been added to the discussion following a Dec. 17 public input meeting, and an additional public meeting has been scheduled for 7 p.m., Wed., Jan. 22, at the Johnston Middle School, 6207 N.W. 62nd Ave., Johnston. 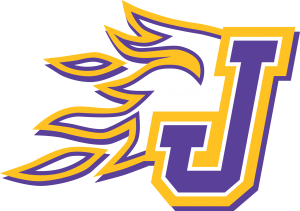 The Board of Education will decide between the two plans at its Jan. 27 meeting.

A newly added proposal would shift other district grade-school boundaries, but Green Meadows West neighborhood students would continue to attend their current schools—either Wallace or Timber Ridge. The proposed changes are intended to relieve over-crowding at Beaver Creek and Horizon elementary schools caused by growth in the city’s north and west. Since 1984, the district has experienced a 1 to 4 percent annual increase in student population.

For new downloadable maps of the two proposals now under consideration, click here.

For a downloadable breakdown of student populations that would be affected by each of the two proposals, click here.

Comments regarding the proposed boundary changes may be directed via e-mail to Johnston Schools communications coordinator Laura Dillavou at: laura.dillavou@johnston.k12.ia.us.

For updates regarding the Johnston Community School District’s facilities construction, school boundary changes, and other proposals, visit the district’s “Construction Central” website.
Posted by GMWHOA Editor at 12:00 PM No comments: