Green Meadows West neighbors of all ages are invited to meet 7 p.m. at the parking lot at Windsor Park, near the intersection of Windsor Parkway and King's Row.

Like cats and dogs, plants have families analogous to animal groups. or dogs. In most prairies, plant families include grasses, daisies or sunflowers, and legumes.

On our walks we often see legumes (Fabaceae family), which are well represented elsewhere by soybean and peas. These are important because they have a very special ability to remove nitrogen from the air, and to convert it from an unusable inert form into biologically active forms. Representative plants in the Green Meadows West prairie include both white and purple prairie clover, leadplant, both cream and white wild indigo, showy ticktrefoil (the source of “sticktights” on your socks), roundheaded bush clover, Illinois bundleflower and partridge pea. Unfortunately, this group also includes the non-native invasive crown vetch, but we’re working to eradicate that one!

Members of the sunflower/daisy or aster family (Asteraceae) we find at Green Meadows West include pale purple coneflower, daisy fleabane, smooth ox-eye, yellow/gray-headed coneflower, Black-eyed Susan, the Silphiums (rosin weed, cupplant and compass plant); and, of course, all the asters (Northeast aster, frost aster, sky blue aster, etc.). Species that, at first glance, might not seem likely members of this family are Liatris (gayfeather or prairie blazing star), prairie sage, ironweed and the goldenrods. The ragweeds (common and giant) are native-but-less-appreciated weedy members of this group, and occur naturally in the Green Meadows West prairie. 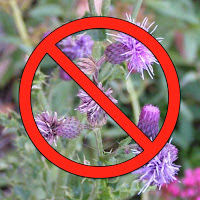 Thistles are also included in the Asteraceae; some are native and some, like the noxious weed Canada thistle, are not. You’d think with a name like Canada thistle it would at least be from North America, but it’s actually Mediterranean in origin! On our July prairie walk, the Culver’s root was blooming profusely and attracted some attention. Its “whorled” leaves—4 or 5 coming from the same spot on the stem, radiating out in a circle—is fairly novel in the world of plant leaf arrangements. The flowers are also attractive, many tiny white flowers forming a cluster of spikes at the top of the plant.

Someone asked me what family this plant belonged to and I was not sure, but looked it up when I got home. They are in the snapdragon or figwort family, the wonderfully named Scrophulariaceae. This group is not as widely represented as the others mentioned above, but does also include the Penstemons (foxglove & large-flowered beardtongues), which we appreciate in the early spring.
Posted by GMWHOA Editor at 5:00 AM